I don’t mean to brag but I’ve really out done myself this week. I made food that I’ve never made before and it turned out better than I could have imagined. I am currently in Ottawa, writing this blog from my mother’s old Toshiba laptop. I’m not used to it so I keep making typos and it’s driving me bonkers. If there are any spelling mistakes, blame it on the laptop…

As I mentioned in my first blog post, I am very into the show “Anthony Bourdain; Parts Unknown”. He is a food writer and host who grows on you the more you watch him. When I first started watching his show “Anthony Bourdain; No Reservations” I thought he was a scummy, try hard. I still think he’s scummy, but that’s part of his charm. He doesn’t pretend to be something he’s not. In “Parts Unknown” he visits cities all over the world and brings the viewer on a culinary and cultural adventure. Some places he visits are straight up dangerous. He eats some of the best local and exotic dishes that each place has to offer.

For whatever reason, the Peru episode really stood out to me. Lima was so incredibly beautiful and the colours of the scenery were reflected in the food. They had an epic feast in a fishing village with Marisa Guiulfo who is apparently Peru’s Julia Child. Everything was served family style and they sat right by the water while the most beautiful dishes I had ever seen were served up. I instantly wanted to be sitting sea side in Peru, eating ceviche and drinking wine. This was obviously not at option, so I decided to do the next best thing; host a Peruvian themed dinner party!

I don’t know if I’ve ever intentionally made or eaten Peruvian cuisine and I wanted to challenge myself by trying something completely out of my comfort zone. Two dishes that stood out to me were rocotos rellenos and ceviche. I proposed the idea to some friends and suggested that they each bring a Peruvian dish of their choice. They loved the idea!

First order of business was finding a recipe for my dishes. Rocotos are apparently a spicy Peruvian pepper that look like red peppers. I found many recipes for Rocotos rellenos and used a combination of a few of them to suit my needs. There are a also a million different recipes for ceviche out there. So many different schools of thought on how long you should marinate it, what time of sea food to use and what type of peppers.

Here is what I found: Firm white fish such as sea bass, stripped bass or grouper is best. Buy your fish the day you plan to make it. Keep the fish on ice in your fridge. Marinate between 20-30 minutes because any longer will burn the fish, making it dry and flaky. There are a lot of traditional Peruvian peppers that are hard to find but Habeneros are a suitable option. (jalapenos are apparently better for a Mexican ceviche.)

If you’re wondering what the Hell ceviche is, it’s basically fresh fish that is cooked using the acid in citrus. Crazy, right? 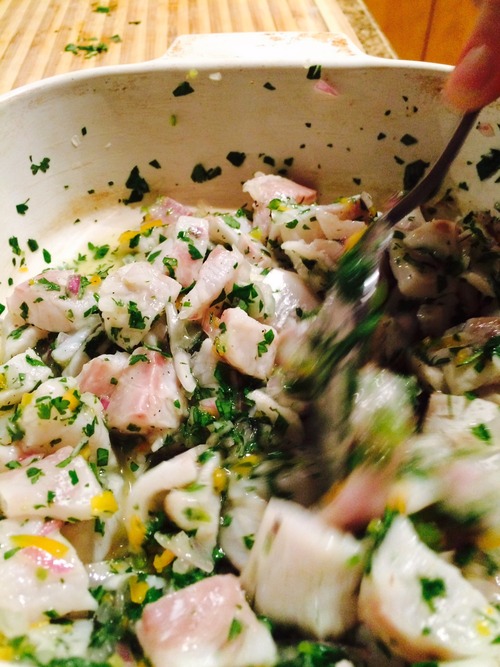 I’m pretty proud that I had the balls to serve company fish that was essentially raw. I went to a fish monger in Kensington market. Mediteranian sea bass happened to be on sale, so that’s what I got. Apparently you’re supposed to ask your fish monger to “smell the fish” to ensure it’s fresh. I felt uncomfortable asking an old Portuguese man to smell his fish, so I asked him instead. He ensured me it was fresh, and that it would be perfect for ceviche. I bought 2 sea bass (about a pound each) and watched as he expertly gutted and de-boned it. I made sure to give it a good smell when I got home. It barely had any smell, which is a good sign. If it smells fishy, don’t eat it. I think that’s a good rule to live by in general…

Before I got the fish, my boyfriend and I tromped around Kensington market trying to find all the obscure ingredients we would need. There are so many tiny little stores that I never would have known existed. We went to about 7 different places before finding all the ingredients. It felt like a fun little treasure hunt. Of course, I couldn’t find the rocotos so I used red pepper.

Rocotos rellenos are peppers stuffed with ground beef, topped with cheese. Google “rocotos rellenos” or “stuffed peruvian peppers” and you’ll find exactly what you need. (Yes I’m lazy, but I also want to encourage you make your own decisions when it comes to cooking, instead of following my exact recipe. That’s how you learn and discover new things!) I ended up adding some extra chili flakes to the filling because I was using sweet red peppers instead of spicy ones. I used store bought tomatoe sauce for the base (I already had to much prep to do and didn’t want to fart around with a homemade sauce) and placed some par boiled potatoes around the peppers that I topped with cheese. The dish is a total crowd-pleaser. It looks so beautiful when it comes out of the oven and tastes like heaven.

Now back to the ceviche. When we were 30 minutes away from eating, I started preparing my ceviche. I had already finely chopped half a large red onion, half a cup of cilantro, 2 habenero peppers (remove the seeds and veins! wear gloves! Don’t touch your eyes and/or private parts after! It will burn!) and juiced 3 limes, 1 lemon and 1 orange. I cut the fish into cubes and combined all the ingredients including salt and pepper in a non reactive dish (such as cornigware). Let it sit for 20-30 minutes in the fridge and you are ready to eat! It was perfect. I was super worried that it wouldn’t turn out, but it was one of the best ceviche’s I’ve ever had.

My friend Carla brought a Peruvian purple potato salad with kalamata oilves and roasted red peppers that was absolutely delicious. Sarah made mussels with tomato, onion, parsley, white wine (or you could use pisco) and lime. (so fresh and light!) For dessert Erinn made quinoa con leche with coconut milk and cinnamon. I never thought I’d like quinoa as dessert but this made me a believer. It tasted like the best rice pudding you’ve ever had. Rich, creamy with the right amount of sweetness and healthy because it’s quinoa!

The whole dinner party was a hit. We listened to soothing pan flute music while gorging on spicy, rich, vibrant dishes. I often get bored of making the same things in the kitchen, so this allowed me to get creative and I had a ton of fun. I’d like to mention that my boyfriend was an excellent sous chef and he did all the dishes.

If you have any questions about the dishes I made, ask me! Or use google! Google is your friend.

So what have you seen recently that inspired you? Was it a movie set in Italy? A colourful scarf that reminded you of your trip to Mexico? Whatever it is, let it be your guide. Try something new! Go on a scavenger hunt for new ingredients. You’ll be surprised by some of the flavors you can create.

I hope you had fun eating with me! Now go eat with your friends. DO IT.