Like I predicted last week, I come bearing news from an adorable coffee shop in Victoria, BC. It’s called the Corner Stone Cafe and it’s located in Fernwood Village. This is the first time since I started my West Coast Comedy tour April 8, that I’ll have a few days to CHILL. Don’t get me wrong, performing every night on tour is a goddamn dream BUT it can get pretty exhausting. We left off last week with my first delicious meal in Vancouver at Havana. Since then I have proceeded to eat and drink many more wonderful treats.

Right after I finished last weeks blog, I met my buddy Adrienne for lunch at Mahony and Sons. This place isn’t ‘OH MY GOD THE FOOD IS SO GOOD’ but it had an amazing patio right by the water and that’s all that I wanted. I ate a nice salad and drank a delicious Caesar in the sun while I looked at mountains. What more could you ask for?

Now, let’s talk about sushi for a second. I ate it twice while I was there and it was tasty and cheap. Everyone in Vancouver has an opinion about where to the get the BEST sushi in the city. I most certainly didn’t have the BEST (according to the locals) but what I ate was better than 90% of the places in Toronto I’ve been to, so I was a happy clam. I was staying at a hotel around Broadway and Oak so I went to places nearby including Sushi California and Sushi_nisms. I’m usually skeptical of a restaurant with an underscore in it’s name, but I tried it out anyway. They had a lunch special that included an appetizer, roll, sashimi and miso soup for $9.50. Not too shabby. I got seaweed salad, tuna sashimi and a spicy salmon roll. It was the perfect amount of food for not feeling liked a bloated pile of crap.

Sushi California was better in my opinion. I opted for the salmon and tuna sashimi and it was perfect. 5 pieces each of beautiful salmon and tuna and the portions were large. All of that for ten bucks. Sushi California is always busy with a line-up so that’s a good sign, right? It may not be the best sushi you can eat but if you find yourself near Broadway and Cambie, check it out!

My favourite way to get around new cities is to walk. Vancouver had some really amazing weather early in the week so there was really no excuse! I went for an hour and half tromp around random neighbourhoods and I stumbled upon 49th Parallel coffee shop that serves Lucky’s donuts. I actually came here last time I was in Van and had a donut. These are by far the best donuts I’ve ever had. I got the tiramisu donut this time and would give my left tit for another one. It was perfect. Soft, fluffy, filled with delicious goodness, not too sweet, fresh whipped cream. MMMMMmmmmmmmm. They have tons of different kinds, it’s so hard to choose!

In that same area there’s a great taco place called The Taqueria. Again, people have very strong opinions about where to get the best tacos in Van but this place did the trick. There’s always a line-up and the prices are reasonable. I got 4 meat tacos for $10.50. I opted for the carnitas 2.0, the asada, the pesce and the pollo. They have a little area with 4 different homemade hot sauces and pickled veg if that floats your boat. It’s not a place that you sit down and have a leisurely meal. It’s a place where you get your tacos, try to find a seat, and chow down. I had just finished eating my tasty tacos when I noticed the girl next to me was drinking a funky little craft beer called 33 acres. It pays to talk to strangers at restaurants because she informed us that this brewery was only a few blocks away! Not only that, but there were TONS of other breweries nearby.

My pal Jeff and I decided to go on an impromptu brewery tour. How could we not? Unfortunately 33 acres didn’t really offer a tour and it was quite packed (because it’s delicious and popular) so we ventured over to Brassneck Brewery instead. Brassneck has everything I want in a mircro-brewery. A lot of exposed wood, flights of beer and bearded hipster dudes serving me said beer. I told the lovely bearded gentleman to “surprise me” and just give me 4 of his favourite beers. My only stipulation was “no sour beers”. Some people love them but I think it’s like sucking on an old vinegar lemon. I got 4 very delicious and different samples of beer that were the most beautiful beer rainbow I’ve ever seen. Once I had a wee day buzz, it was time to go home and rest before dinner and Yuk Yuks.

I met my buddy Adam at a Chinese restaurant called Peaceful. Guy Fieri ate there on triple D! Maybe we ordered the wrong things but I wasn’t hugely impressed. The chicken dish we ordered had good flavour but the chicken they used tasted like the saddest chicken ever. It had a weird squishy texture like a bird who didn’t have bones. I creeped me out. The cumin lamb noodles were good but VERY cumin-y. The beef rolls were a definite highlight. Get those! Beef and sauce rolled in this pastry. I’ve heard good things about this place from other people so maybe we just had a weird experience. Maybe see what Guy ordered and get that? If you trust Guy…I don’t know if I trust Guy…that Guy seems to like everything WAY too much, know what I mean? Like, how can EVERYTHING be a trip to flavour town? 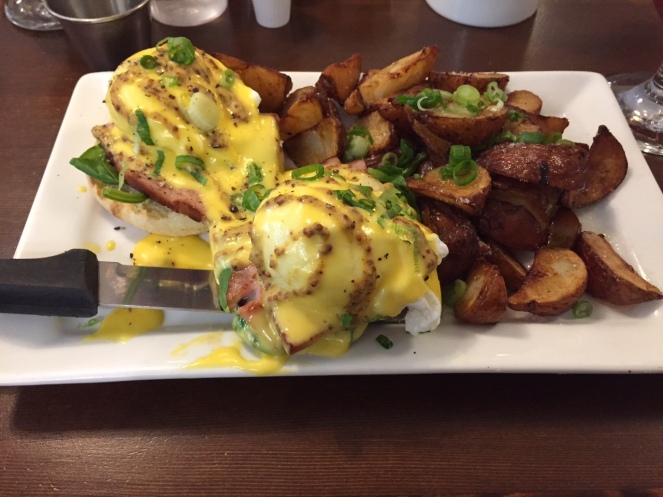 Now it’s time for Brunch, the most obnoxious and delicious meal of the day. The only meal I will line-up for. Jeff, kathleen and I went to a delicious place called Yolks. They have a few different locations. After waiting for 45 minutes (they take your number and text you when your table is almost ready so you can go to a coffee shop and hang while you wait) we got a coveted seat at the busy brunch spot. I got eggs benedict with hand carved honey ham, spinach and dijon with a side of truffle oil potatoes. I love truffles. Some Food Network chefs poo-poo it (I’m looking at you, Aaron Sanchez) but I can’t get enough. I’ve had a lot of eggs benny in my day, but this is top 5 for sure. There’s something about the dijon with the ham that bumped it up a notch and help cut the richness of the hollandaise. They also have really good Caesars with plenty of fresh horseradish. Horseradish is key! Jeff got mango crusted french toast (what!?) and Kathleen got beautiful fluffy waffles. I had a piece. PERFECTION. If you find yourself in Vancouver, get your buns down to Yolks. Also, our server was adorable and nice. Call me crazy, but I’m a sucker for good service!

After shoving all sorts of different cuisines in my face (I forgot to mention the poutine and chicken wings from Original Joe’s. It’s a chain restaurant but they have $4 house wine soooooo you get why I went there) my friends John and Brooke had me over for a healthy dinner. They made me what they called a “basic bitch salad” which was kale, spinach, shredded beet and carrot, grilled chicken, avocado and quinoa. There was nothing basic about this amazing salad. They also had this dressing called “Glory Bowl” that was adapted from a dish from the Wedgewood hotel. It’s a tahini based dressing and I would drink a pint of it. It felt so good to eat veggies that were nutritious and delicious! 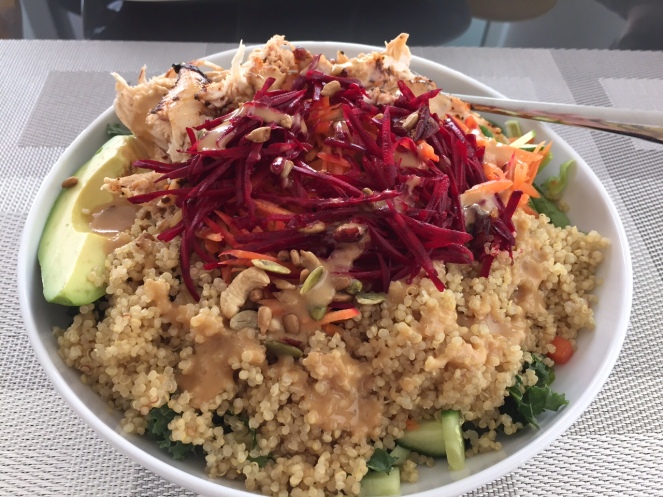 That concludes Eating with Julia, Vancouver edition! On Sunday I took the ferry to Victoria and had a spicy chicken sandwich at White Spot. It was my first White Spot experience and it reminded me of the Wendy’s spicy chicken, which is adequately satisfying!

I have a whole week in Victoria so stayed tuned and check back next week to see what kind of delights I shove into my face. Thanks for eating with me! Byeee!